Packings of soft spheres at zero temperature have long served as model disordered solids, as they possess a rigidity transition (at “point J”) in the absence of translational order and have a host of interesting properties as a function of density, frictional interactions, temperature, applied stress, and other control parameters. 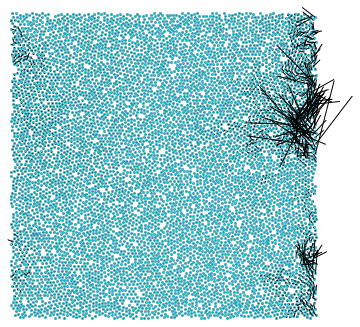 An early interest of ours was to investigate this model system under different boundary conditions. Amorphous solids with free surfaces in general display a number of intriguing phenomena. Both crystalline and amorphous nano-particles have unusual vibrational densities of states, in part due to their finite size and in part due to the heterogeneity of bond number and strength for particles as a function of distance from the surface. Shear banding and the failure modes of mesoscopic solid systems, such as nanopillars, have been an active area of research, and there again the free surfaces play a role in mediating the allowed failure modes. Perhaps most famously, nanometrically thin films of polymers and small-molecule glasses have material properties which deviate sharply from bulk expectations. An outstanding challenge for these systems has been the search for a structural length scale that corresponds to this length scale of accelerated dynamics; just as in bulk glassy systems, simple measures of static structure fail to correlate with the observed dynamic length near a free surface. 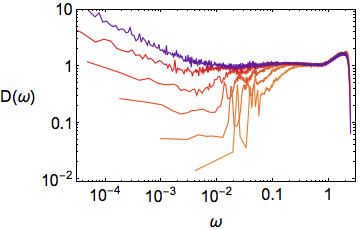 We were interested in studying the characteristic vibrational modes at the surface of model disordered systems. We looked at disordered spring networks derived from jammed sphere packings, which have been shown to give physical insight into the material properties (elastic moduli, thermal transport properties, etc.) of real materials. In addition to the surface acoustic waves expected from continuum elasticity – e.g. Rayleigh waves – we find that there is an additional population of disordered surface modes (shown in the plot to the left), and that these modes have an intricate spatial structure that extends into the bulk by a diverging length scale set by the proximity to the jamming transition. Recent work (coming soon!) indicates, though, that these structural signatures of free surfaces do not survive when studying finite-temperature glassy systems.

In addition to our study of disordered spring networks with free surfaces, we also undertook a study of how stresses are distributed and supported in these jammed systems. Our particular focus was on the states of self stress — arrangements of tensions and compressions on the bonds that lead to no net motion of the particles. Mathematically these are the natural dual of the zero-energy motions of particles. Inspired by this mathematical relationship, we investigate the spatial organization of the states of self stress associated with individual bonds for systems above the jamming transition, expecting to find a natural correspondence with the spatial organization of zero-energy motions for systems below the jamming transition. Although limited by numerics, our analysis suggested that the spatial organization of these objects is actually controlled by a (possibly dimension-dependent) combination of the multiple diverging length scales known to exist near point J.